Two of the area’s most influential members of the business and financial community will speak to Morehouse College students in early April about issues and ideas in the financial sector.

Both will be featured speakers for Morehouse College’s Leadership Lecture Series, a program that allows students the unique opportunity to learn from, and interact with, some of the world’s most accomplished and innovative corporate leaders. Past participants have included Berkshire Hathaway’s Warren Buffett, The Coca-Cola Company’s Muhtar Kent, fashion icon Tommy Hilfiger, and Goldman Sachs’ Lloyd Blankfein. 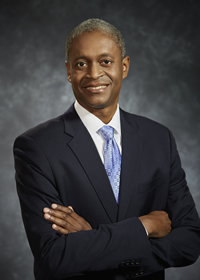 Bostic is the 15th president and CEO of the Federal Reserve Bank of Atlanta. He is responsible for the Bank’s activities, including monetary policy, bank supervision and regulation, and payment services. In addition, he serves on the Federal Reserve’s chief monetary policy body, the Federal Open Market Committee. Bostic served as the assistant secretary for policy development and research at the U.S. Department of Housing and Urban Development from 2009-2012, and was the Judith and John Bedrosian Chair in Governance and the Public Enterprise at the Sol Price School of Public Policy at the University of Southern California. 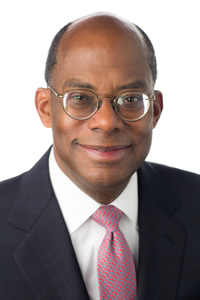 Ferguson is the president and CEO of TIAA, the leading provider of retirement services in the academic, research, medical, and cultural fields, and a Fortune 100 financial services organization. He is the former vice chairman of the Board of Governors of the U.S. Federal Reserve System. Ferguson served on President Barack Obama’s Council on Jobs and Competitiveness, as well as its predecessor, the Economic Recovery Advisory Board. Ferguson also co-chaired the National Academy of Sciences’ Committee on the Long-Run Macro-Economic Effects of the Aging U.S. Population.