Morehouse alumnus Melvin “Jerry” G. Carter was recently promoted to the prestigious rank of brigadier general in the United States Marine Corps and will serve as the Director of Intelligence for the Marines.

“I don’t think that anybody would say that they came to the Corps to be a general officer; it is something that just happens along the way,” Carter said. “It is really an honor to be here. I never saw a mile away in a thousand years that I would be here.” 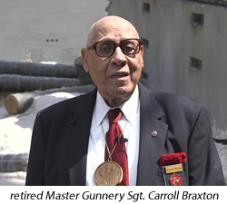 Carter said that his promotion was particularly meaningful because he was pinned by retired Master Gunnery Sgt. Carroll Braxton, a member of the history-making Montford Point Marines, the first African Americans allowed to enlist in the Marine Corps. The Montford Point Marines helped to integrate the Marine Corps in 1942 after President Franklin D. Roosevelt issued an executive order preventing governmental agencies and federal contractors from refusing employment in the defense industry to black candidates and other minorities based on race, creed, color, and national origin.

“In the early 1940s, African Americans weren’t allowed to serve side-by-side with others,” Carter said. “Today, you have a young African-American Marine who is able to rise to the ranks of general officer. The sky is the limit in the Marine Corps.”

Carter grew up in York, Pa. and enlisted in the Marine Corps in 1985. He was later awarded an NROTC Scholarship to attend Morehouse College, where he was groomed as a leader, a scholar, and a community servant. After graduating in 1992 with a degree in banking and finance, Carter was commissioned as a second lieutenant in the Marines.

“When I got down to Morehouse, it was family-oriented, and a historically black college—it was pretty awesome,” Carter said. “I learned a lot about myself and my heritage by going to an HBCU.”

During most of his 34 years of service, Carter has served as a Marine Air Ground Task Force Intelligence Officer and has completed multiple tours overseas in combat zones to include: Operation Joint Endeavor in Bosnia and Herzegovina, Operation Anaconda in Afghanistan, Operations Balkan Justice and Restore Freedom, and Operation Iraqi Freedom.

“I love what the Marine Corps stands for, the camaraderie, the esprit de corps, the physical fitness, the challenge of it,” he said. “I just couldn’t be anything else but a Marine. Our business is a tough business—only one percent of the nation serves in the military. We have a mission to accomplish, and I am honored to serve.”