Morehouse College maintains its No. 4 ranking among Historically Black Colleges and Universities (HBCUs) nationwide, according to U.S. News & World Report 2023 rankings. Recognized for one of the most comprehensive new student orientation traditions in higher education, the College climbed 13 spots to becoming No. 1 HBCU overall for First-Year Experiences. Additionally, with the launch of “Morehouse in the Metaverse,” the Black Men’s Research Institute, and several other academic initiatives, Morehouse advanced to the No. 1 Liberal Arts College and Most Innovative College among Georgia institutions that men can attend; it is the No. 1 HBCU for men for innovation and undergraduate teaching and is the No. 2 HBCU in these categories nationwide. The College advanced four spots to No. 124 among Liberal Arts Colleges nationwide.

The launch of the College’s landmark $500 million comprehensive capital campaign, themed “Making Men of Consequence,” has led to the funding and creation of several pedagogical initiatives such as the two pioneering programs “Morehouse in the Metaverse,” led by Dr. Muhsinah Morris, and the Black Men’s Research Institute, headed by two-time former HBCU president Dr. Walter Kimbrough. The year has also brought several strategic corporate partnerships that have increased student scholarship awards and post-graduate study and job placement opportunities, expanded access to global learning experiences, and the construction of world-class facilities such as the newly reopened B.T. Harvey Football Field and Edwin C. Moses Track & Field as well as the renowned Martin Luther King Jr. International Chapel.

The U.S. News & World Report rankings mirror other nationwide rankings, such Academic Influence, where Morehouse College ranks as the No. 1 Small College in Georgia, No. 1 Liberal Arts College in Georgia, No. 1 Online HBCU, and the No. 28 Liberal Arts College nationwide. For more information about growth and innovation at Morehouse College, visit morehouse.edu. 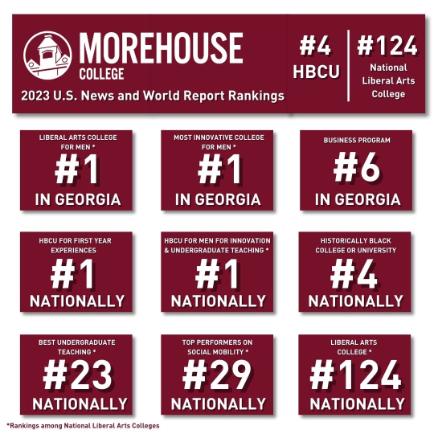