ATLANTA—Tickets are on sale now for the third annual Morehouse College Human Rights Film Festival (MCHRFF) at morehousehumanrightsfilmfestival.com. The festival returns this year from Sept. 23-25 with hybrid online and in-person film screenings at the Plaza Theatre. The three-day event will feature 87 films from 29 countries and include 15 student films from three institutions: Morehouse College, Spelman College, and University of North Carolina at Chapel Hill. The documentary and short film screenings provoke discussions about immigration, race, gender identity, politics, health care, law enforcement, along with many other human rights and social justice topics.

In addition to seeing new films, festival attendees can also attend workshops conducted by masters in screenwriting, editing, directing, and producing – which will be announced in the coming weeks. Previous festival participants include Oscar-winning director, jury president for the 2021 Cannes Film Festival, and Morehouse alumnus Spike Lee ’79, actor Omari Hardwick (Showtime’s “Power”), actor-director Nate Parker (“The Great Debaters”, “Red Tails”, “The Birth of a Nation”, “American Skin”), filmmaker and theatre director Oz Scott (“Black Lightning”, “For Colored Girls Who Have Considered Suicide/When the Rainbow Is Enuf”), and many more.

The goal of MCHRFF is threefold: to educate and expand awareness of social justice issues, both nationally and globally; to generate conversation and dialogue around civil and human rights; and to inspire innovative and creative new approaches to social change.

“Television and film are a means of continuing education, where we can bring awareness to the diversity of human experiences and lived conditions – whether good or bad – which is exactly what we get to do by partnering with these tenacious filmmakers,” says Kara Walker, executive director of the Morehouse College Human Rights Film Festival. “Historically, Morehouse has been at the center of civil rights and social justice movements, which is why we created this platform to elevate the causes that are important to the unyielding filmmakers, activists, and humanitarians from around that world that sought to be a part of this year’s festival. It is our hope that, upon viewing, we ignite a desire for action and change in our attendees.”

Attendees can choose from the following options to participate in the film festival: 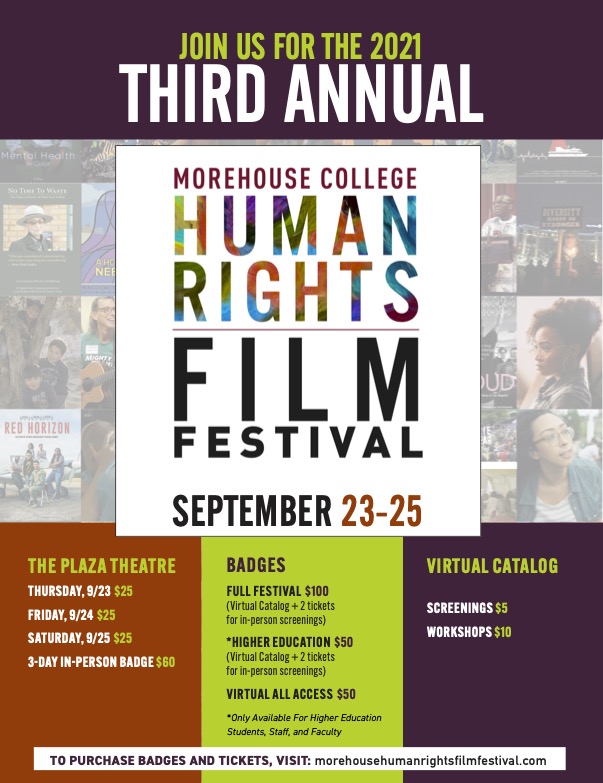