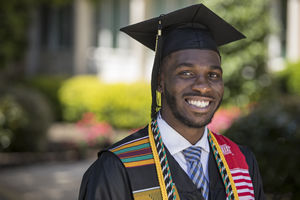 Morehouse College is launching a ground-breaking program that will enable graduates to pursue advanced degrees, start careers, and build wealth without being tethered to undergraduate student loan debt.

The new Morehouse College Student Success Program, a fund-raising and research initiative, was established by the Board of Trustees as a national investment strategy to curb student loan debt and help graduates to prosper faster. Under the Student Success Program, Morehouse will solicit and accept donations made specifically to reduce or eliminate the student loan debt of Morehouse Men, thus creating an opportunity for greater financial freedom for new alumni and their families.

Morehouse will study the impact of the cost of higher education on Morehouse Men, and the freedom of choice that alumni experience in their careers when their student loan balances are paid in full or reduced to manageable levels.

According to UNCF research, 80 percent of HBCU students use federal loans to fund their education, compared to 55 percent of their peers at other private and state institutions. HBCU graduates also borrow nearly twice as much—$26,266 on average—than non-HBCU students. And one in four HBCU students borrows $40,000 or more to attend college. At Morehouse, the student loan debt threshold at graduation is between $35,000 and $40,000.

“The Morehouse College Board of Trustees believes that student loan debt can be an obstacle in the path of Morehouse Men that can cause them to delay enrolling in advanced degree programs, working as K-12 teachers, or pursuing other interests that they are passionate about,” said David A. Thomas, President of Morehouse College. “The Morehouse College Student Success Program will provide students with a liberating gift that will wipe away or greatly reduce their student loans, allowing them to pursue their dreams and lead lives of leadership and service immediately after graduation.

“We, at Morehouse, see the Student Success Program as an important step toward improving outcomes for our graduates and addressing the income disparities that people of color experience when they are overburdened by debt.”

America’s student loan debt—now more than $1.5 trillion, according to the U.S. Department of Education (more than the nation’s $1.3 trillion in auto loan debt)—can exacerbate the wealth gap that exists between black families facing generational poverty and other groups. Black households nationally have the lowest median net worth, lagging behind Asian, white, and Latin Americans respectively, according to the U.S. Census.

In its study of student loans in the HBCU community, the UNCF’s Frederick D. Patterson Research Institute found that HBCU students are more likely to seek loans from more costly sources and encounter more difficulties in repaying their loans in the seven years after leaving college. Repayment of student loans can be aggravated by the economic status of borrowers, labor market conditions, and factors such as a student’s educational program choice.

The Brookings Institute projects that based on current trends in student loan defaults, two in five of all borrowers—nearly 40 percent—will default on their loans by 2023.

UNCF officials agree that offerings such as Morehouse’s Student Success Program could become a new model for HBCUs and other liberal arts institutions seeking strategies to offset the stress of student debt on alumni and their families.

“Morehouse’s program to provide debt relief to new graduates is a fund-raising opportunity that should be studied and duplicated nationally,” said Michael L. Lomax, president and CEO of the United Negro College Fund. “The impact of such a gift, particularly for minority or economically disadvantaged families, could accelerate the growth of a more diverse and robust middle class.”

The Morehouse College Office of Institutional Advancement is in talks with a number of philanthropists, corporate partners, and other supporters who have expressed interest in donating to the new Student Success Program. Gifts are tax-deductible and will be disbursed directly to designated students or graduating classes.

“We look forward to charting the progress of those who receive generous support from the Student Success Program,” Thomas said. “We encourage those who receive gifts to pay it forward and help upcoming classes to enjoy a significant level of financial independence from student loan debt.”