The Rev. Dr. Michael Walrond to Graduating Seniors: ‘Be Strong and Courageous’ 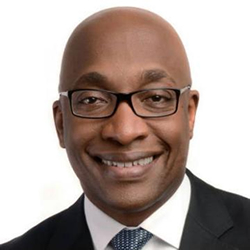 The Rev. Dr. Michael A. Walrond Jr., a 1993 Morehouse alumnus and senior pastor of the vibrant First Corinthian Baptist Church in Harlem, exhorted graduating seniors at Baccalaureate Saturday to “be strong and courageous” in these challenging days and the years that lie ahead.

Walrond, affectionately known as “Pastor Mike” to a New York congregation that’s grown from 300 to more than 10,000 in 13 years, delivered an impassioned sermon to 390 students gathered with friends, families, and faculty in the Martin Luther King Jr. International Chapel.

In “Notes from a Traumatized Leader,” Walrond spoke about the succession of leadership from Moses to Joshua in the Old Testament, and God’s admonitions to Joshua to “be strong and courageous” leading the Israelites. (Joshua 1:1-1-9)

“It was now time for Moses’ assistant to take directions,” said Walrond. “It was a crowning moment for Joshua. Here was Joshua, ready to be the leader of God’s people, but God makes a point to tell him to be strong and courageous—three times!

“God sensed a deep-seated trauma in Joshua’s spirit,” explained Walrond, referring to an earlier time when the rebellious Israelites threatened to kill Joshua and Caleb for encouraging them to enter Canaan, a land of milk and honey… and giants.

“For Caleb and Joshua’s audacity, the people wanted to stone them,” Walrond recounted. “That was the birth of Joshua’s trauma. He was shaken, so God said to him, ‘Be strong and courageous.’ So, here’s a traumatized leader, and here you sit today preparing to be leaders in these tumultuous times.”

Walrond then encouraged graduating seniors to draw from the legacy of a people who were also traumatized.

“We know trauma,” he said. “We know what it is to be traumatized, but we still stand firm. We’ve faced it every day: Jim Crow, rape, poverty, gender stereotyping, abandonment, and neglect. We KNOW trauma! All are designed to cripple us and castrate us, but we are still here. And we have been here before, seeing barbarism masked as civility.”

Walrond also reminded the seniors he called his “soon-to-be Morehouse brothers” to remember who they are. “Do not forget who you are. Do not forget your birthright. “

And Walrond particularly roused graduating seniors by reminding them that, just as Moses life was ended and Joshua’s time was at hand, “It's your time now … Be strong and courageous for that is what is required in this moment. Because this historic moment requires authenticity,” Walrond emphasized. “It takes strength and courage to be who God calls you to be.”

Walrond also reminded students that God is calling them to do something great. “It is now time for you to stand and be who God created you to be. There’s a God of the universe who directs you, and the same God will carry you through.

“You are Morehouse Men!” Walrond said forcefully. “You have grown tall enough now to wear the crown on your heads. You are a Morehouse Man! Don’t betray that title.”

Walrond, one of the most prolific and sought-after teachers and preachers in the country, called it “a high” for him to return to Morehouse College, a place he called holy ground. “Every time I step on this campus,” he said, “I’m tempted to remove my shoes.”

While bells tolled Saturday, graduating seniors were guided into Saturday’s 3 p.m. ceremony by the Rev. Dr. Lawrence Edward Carter Sr., dean of the Martin Luther King Jr. International Chapel. And onlookers—phone cameras in hand—gathered on the plaza to watch the men of Morehouse arrive.

And Shaun Russell, waiting for his son, Ryan Russell, a political science major, praised Morehouse for providing his son with a life-changing experience.

“It made him a whole different person,” Russell said. “It’s hard to describe this to people, but it’s a kind of pride and a confidence that Morehouse instills.”

After graduating Sunday, Ryan plans to study political theory at the University of Virginia.