“This country has taken a turn toward a second Reconstruction, an undoing of the gains for humanity that have been made in the fifty years since [Dr. Martin Luther King Jr.] was assassinated.”– U.S. Rep. Sanford D. Bishop Jr. ’68 (D-GA, Albany)

The Class of 2018 has been equipped to reverse the regression the nation has seen in civil and human rights, U.S. Rep. Sanford D. Bishop Jr. ’68 (D-GA, Albany) told the newest group of Morehouse College graduates Sunday.

“This country has taken a turn toward a second Reconstruction, an undoing of the gains for humanity that have been made in the fifty years since [Dr. Martin Luther King Jr., Morehouse Class of ’48] was assassinated,” the Georgia Congressman said. “This is the world that you will be entering, Class of 2018. You must take up the struggle. 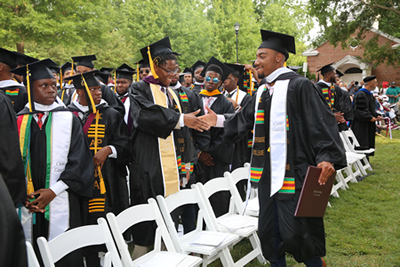 “But have no fear. Your Morehouse experience has prepared you—your academic preparation, your discipline, your persistence, your faith and your commitment to humanity. You truly are prepared and have the tools to change this world.”

On a mostly sunny and warm day on Morehouse’s picturesque Century Campus, some 6,000 family members and friends watched as the 390 men of Morehouse became Morehouse Men during an emotional Commencement ceremony, full of tradition and pageantry.

Led by African drummers, the graduating seniors processed through campus and around historic Graves Hall to the pristine green. Beaming alumni cheered.

“They are here!” exclaimed Dr. Anne Wimbush Watts, retired associate vice president for Academic Affairs and the Commencement Chief of Staff for Morehouse’s Office of the President. Families screamed and shouted for their loved ones, many in tears. 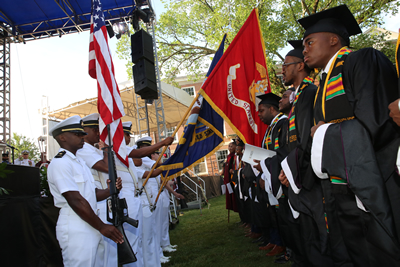 In his first Commencement ceremony, Morehouse President Dr. David A. Thomas told the soon-to-be graduates— as well as the College community—that this day was about the start of something special.

“I fervently believe that we at Morehouse College stand at a moment of beginning,” Thomas said, igniting applause. “A moment to celebrate our new vision, powered by and sustained by, the guiding spirit of our mission and its core values as we give life to new aspirations, as we blaze trails to new paths of service, and as we move forward with renewed energy to engage in an exciting future.”

“I dream a Morehouse, as a must-go-to institution, as a well-defined institution, and as an uncompromising institution for inclusive excellence and unlimited achievement,” he said, echoing Langston Hughes’ poem “I Dream A World.” 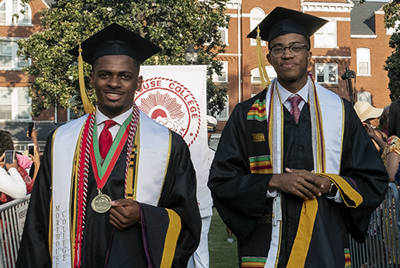 Valedictorian Derrick L. Parker Jr. ’18 said that Morehouse offered him and his fellow graduates a transformational education, and now as alumni they are charged to give back to the community and to do just as Bishop asked them to do—to right the many wrongs in this nation.

Two honors were announced during the ceremony. 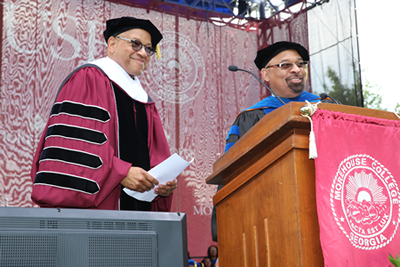 Also, Dr. Miesha Williams, an assistant professor in the Department of Economics, was announced as the 2018-2019 winner of the Vulcan Materials Teaching Excellence Award.

But the day belonged to the new Morehouse Men, many of them happily dancing across the stage to accept their diplomas from President Thomas.

Before they departed the Century Campus for the final time as a full class, Thomas charged them to not allow obstacles or their own future failures to keep them from their service to the world as Morehouse Men.

“I have also learned that the most important form of forgiveness is not my forgiveness of others, but my willingness to forgive myself,” Thomas said. “And then to move forward with greater courage and commitment to meet the clarion call to service that this charge today espouses. And, yes, you will make mistakes; yes, you will fail sometimes. But to counteract the ravages of failure, you may need to stand taller, step higher, work harder, think deeper, dream farther, and run faster and with more determination than you have ever run before. 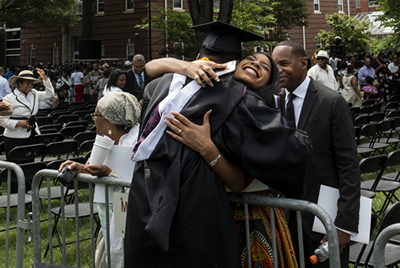 “And, finally, we challenge you to hold out a light so that your brother or sister lost at sea may find the way back to land,” Thomas said to the class he dubbed “The Great 1-8.”

“For Morehouse and her teachings will always be your port of call. This is our covenant; this is our charge to you… I hope with all my heart that you will accept the message of this charge and act accordingly. For if you do, I have no doubt that the world you inherit today, when you leave this hallowed hill, will one day be better than it was when you found it.”