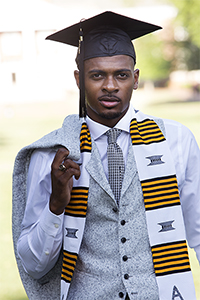 Derrick Parker is the kind of student that teachers always seem to remember—gifted, ambitious, and relentless in his pursuit of excellence. His parents would expect nothing less. They’ve had high hopes for him.

Parker, of Kansas City, Mo., would be the first in his family of six to attend college. It was his parents’ dream. It was why they labored day after day until their hands and feet ached. His father, Derrick Parker Sr., cut heads in a barber’s chair. His mom, Nicole Courtney, toiled as a machine operator. It was a good, honest living, but not want they wanted for their oldest son.

And Parker was a high achiever who did not want to disappoint. So, he made a promise to himself that he kept: to work hard enough to earn straight A’s and a scholarship to cover his tuition. On Sunday, the Gates Millennium Scholar will graduate from Morehouse College with a perfect 4.0 as the Class Valedictorian.

“My parents have been such a great support system to me over the years, but I knew that they couldn’t afford to send me to college,” said the political science major. “My goal was to go to college and not have my parents pay a dime, and I did it. I worked day in and day out to not only graduate from college, but to graduate at the top of my class.”

Parker spent his junior and senior years in high school filling out more than 50 scholarship applications to finance his college education. He wanted to attend a school that would help him to lay a firm foundation for his life. His prowess as a scholar had earned him a national, academic “varsity” letter—the prestigious Gates Millennium Scholarship. His mother cried when he ripped open the letter and shared the news about the scholarship funded by a billionaire philanthropist who would cover his full tuition.

Parker applied to state schools at first, and then cast a wider net after receiving a visit from a Morehouse College recruiter.

“I knew nobody who went to Morehouse,” Parker said. “My dream school was Mizzou.”

But when he left math class early one day to speak to a Morehouse administrator about opportunities at HBCUs, he became intrigued about the idea of a college for men that groomed global leaders. “I did my own research on Morehouse and learned about its rich history and alumni, and its mission of producing outstanding African American men.”

Months later, Parker visited Morehouse to meet professors and scholars, and stand in front of Martin Luther King Jr. International Chapel. It was then that he knew he wanted to become a Morehouse Man. He chose to study political science on the campus that had produced several U.S. Congressmen, a U.S. Secretary of Homeland Security, and the first black mayor of Atlanta.

“I always had this fascination with how the world works and the system of laws,” he said. “Laws have changed the face of this nation, and lawyers have been on the frontlines of that change helping to lead the charge.”

As an incoming freshman, he had a prestigious resume. In addition to the Gates, he was a Coca-Cola Scholar, a GE-Reagan Foundation Scholar, and an Anne Frank Scholar. To keep himself on track academically, he set the bar high and surrounded himself by like-minded friends. This time, he wanted to be a valedictorian. It gave him a reason to say “no” to distractions that would take him off course.

Parker focused on excellence. He became a Presidential Ambassador, joined the Morehouse Debate Team, and then turned his attention to Moot Court, where he met Dr. Winfield Murray, a pre-law professor who had led the Moot Court Team to victory as the first HBCU team to win a national title at the American Collegiate Moot Court Association’s national championship. Murray helped Parker to hone his research and writing skills, pushing him to rewrite arguments and term papers again and again until he got it right. It helped Parker to develop a deep understanding of case law and a swagger in the courtroom.

“Professor Murray was not only a mentor, but also a great friend,” said Parker, a member of Alpha Phi Alpha Fraternity. “He was the type of professor who didn’t hold back. He would give you tough love and tell you how it is. He had very high standards.” 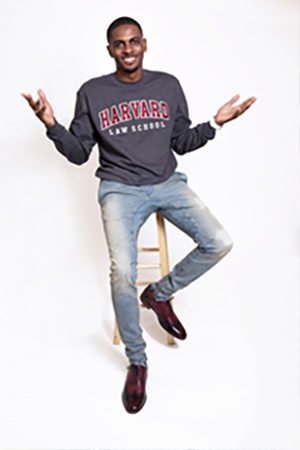 Parker got several opportunities to test his legal knowledge in the real world. He served as an attorney general for the Morehouse College Student Government Association, interned for U.S. Congressman Emanuel Cleaver, worked at law firms, and led a campaign for a city councilman in his hometown. His candidate won.

Parker’s dedication to the law got him recognized by the Ivy Leagues. He was one of the youngest students selected, for example, to participate in the prestigious Harvard/NYU Trials Law program.

By his senior year at Morehouse, Parker was as sought after as a first-round draft pick. He had earned his 4.0 grade point average and national recognition as a finalist for both the Rhodes and Truman Scholarships, the top academic prizes for an undergraduate. Nineteen colleges accepted his law school enrollment application and offered to pay his way.

“I was accepted by Harvard, Yale, the University of Chicago, Cornell, Georgetown, Duke…,” he said, smiling broadly. He chose Harvard Law over the rest. “Harvard has been a dream of mine since for as long as I can remember.”

After Harvard Law, Parker plans to practice law and eventually return home to work on the behalf of marginalized communities. He hopes to run for an elected office someday. “I will go as far as God allows me to go in my career.”

Parker feels that as a Morehouse Man he is ready for whatever the future has in store for him. He defines a Morehouse Man as one who lives by the “Five Wells”—well-read, well-spoken, well-traveled, well-dressed, and well-balanced—and selflessly gives back to his community. He noted Morehouse alumni believed in him and gave back by helping him. And he intends to do the same for the men of Morehouse still at the College, pursuing their dreams.

“My Morehouse experience has been pretty amazing. It has contributed to my success and helped me as a person and put me on this path,” Parker said. “I am excited about the future. I think that in our community, we need leaders who young people can look up to as a source of inspiration and hope. I want to be one of those leaders.